Skip to content
Home / Press / It took Steve MacDonald more than one try to get it right. But persistence is a prerequisite. 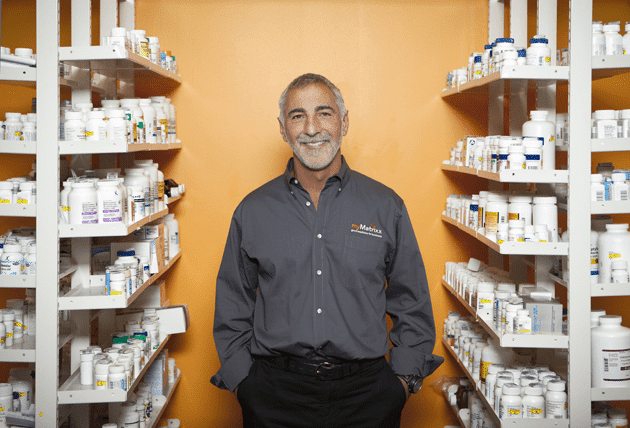 Since he set out on his own nearly 15 years ago, Steve MacDonald failed in one business he began, and promptly started another — only to later be fired from it. But now, armed with somewhat painful yet powerful lessons, he’s running a business the way he’s always wanted to with his current company, myMatrixx.

myMatrixx, which had $72.84 million in revenue in 2012 and has more than 140 employees, specializes in providing services for workers’ compensation benefits. This includes everything from medications and home nursing services to medical equipment. But the scalable key to the company’s fast growth is how it does this: It provides an interface to streamline the payment processing system to “make sure patients are getting the services they need in the timeline they need them,” MacDonald says.

The company negotiates discounts for medications and supplies, while at the same time monitoring activity for insurance companies to help its clients, who are mostly self-insured employers. It serves as a “safety net,” checking to find if there are indications of fraud, abuse, or overutilization of workers’ compensation, MacDonald says. It varies by state, but typical cost savings from using myMatrixx is around 30-35%, according to his figures.

The company, which made the Inc. 5,000 list four years in a row, has more than 400 clients, with a client retention rate nearing 99%. Since beginning in 2001, only two clients have left the company, and one is planning to come back after a two-year stint with a competitor. It has grown by more than 20% each of the past two years, a trajectory MacDonald plans on continuing.

MacDonald, 45, started his career working for someone else, at PMSI (at the time, Pharmerica), a pharmacy and medical services company serving the workers’ compensation population. He worked his way up from sales to running the firm’s Catastrophic division. In 1999, MacDonald pitched a business plan for moving his division’s offerings online to automate its processes, but was shot down by board members who didn’t see the Internet becoming a popular household tool.

“I saw the world differently at that moment,” MacDonald admits. “So I told my boss, ‘I’d love to do this here, but if you’re not going to do it here, then I’m going to start my own company.’”

MacDonald turned his idea into AccessLife, the first online portal for individuals suffering from brain and spinal cord injuries to share information and resources, and order medical supplies or medications. The software also featured an ancillary medical service that helped “process insurance claims and manage distribution for the products the patients ordered,” according to the company.

To raise capital for his venture, MacDonald never asked people for money, but always asked for advice. Often, he found advice sessions over a cup of coffee would lead to an investment. MacDonald and his business partner raised more than $5 million through this kind of networking and were able to persuade actor Christopher Reeve to join the board of directors.

Like many Internet startups in 1999, the company burned through the $5 million quickly, and MacDonald was forced to shut down the AccessLife portal and lay off 60 people. “In some degree it was a big public disaster,” MacDonald admits.

He decided to focus on TechHealth, the commercial aspect of the software they built. Having lost all of his investors, MacDonald’s business partner and a previous boss both took a risk and wrote checks to keep TechHealth up and running. The company landed a deal with Blue Cross Blue Shield, which attracted new investors who provided $1.5 million in funding.

To secure the last round of financing, the investors told MacDonald he’d have to fire his business partner. “A lesson for other entrepreneurs,” MacDonald says, “When you fire your votes on the board, then that leaves you a sitting duck. So I was the next to go.” MacDonald and his partner were both fired from the company they founded, losing the software program he developed. MacDonald considers it the best thing that ever happened to him.

In 2001, while sorting out a settlement in court with the TechHealth investors, MacDonald was approached by Ron Warble, of Brown & Brown’s Amerisys. “If you could build me a (customized online) pharmacy program, I’ll be your best customer,” Warble said

MacDonald decided to give it a shot. He knew if he could build it, he could market it to others. After borrowing $5,000 from his father and $5,000 from a friend, he found a partner to help with startup costs and used the last $20,000 he had to hire a programmer to build the first version of the myMatrixx software.

Working out of the back of a warehouse with a college student answering the phone (who is now a vice president with the company), MacDonald started “dialing for dollars,” looking for clients. For the next two-and-a-half years, MacDonald didn’t take a salary. Instead, he reinvested whatever small profits the business made.

At first, MacDonald had a hard time persuading customers that his small startup could handle their workers’ compensation needs. He focused on getting the clients his competitors didn’t want: small to mid-sized municipalities and school boards. MacDonald says he wanted to get as many customers as possible, no matter how tiny the deal.

Servicing smaller customers also allowed him to learn from them and improve the business. He hand-delivered invoices, taking the opportunity to talk with clients and ask them what he could do better and what would make their jobs easier. This set the foundation for myMatrixx: offering superior customer service for technology that streamlined how customers processed workers’ compensation pharmacy claims.

Eventually the small customers led to larger ones, and as the business grew, MacDonald took another approach to build growth — he recruited top talent. By hiring well-known names in the industry, he was able to cement myMatrixx’s legitimacy and also take advantage of the knowledge and relationships the new employees brought with them.

But as the business took off, the relationship with his partner started to deteriorate. “He was a great guy… he gave me the confidence that I could bootstrap something,” MacDonald says. But the two had different visions for the company.

In 2005, a private equity firm bought his partner’s shares for $3.5 million, but MacDonald learned from his previous business that he wanted control. He met Tom Cardy (now myMatrixx’s CFO) through a connection at his CEO peer group, and together they created a financing deal that would allow MacDonald to gain 81% ownership by raising $1 million of equity and $2.5 million of long- and short-term debt. With sales continuing to climb, MacDonald paid off the debt in three years.

MacDonald attributes a large amount of myMatrixx’s success to the company’s ability to innovate. To do this, MacDonald says it’s all about having the right people.

With the company experiencing such fast growth, MacDonald elicited the help of Mary Key, a consultant with CEO Florida Forums. Key says one of MacDonald’s key concerns was maintaining the company’s culture, so she worked with him to create core values for the firm. These values guide the company not only in what it does, but also in whom it hires.

MacDonald says the first thing a manager should look for is whether or not a person is willing to learn. “If a person is humble enough to learn, then they’re usually humble enough to be a coworker,” he says. myMatrixx candidates have to pass the culture test first, and an aptitude test second.

“There seems to be no limit to his abilities in regards to people and bringing the right team together to accomplish the goal,” says Mike Bunkley, myMatrixx’s senior vice president of business development. “He knows what he wants, and he knows how he’ll get there.”

“He knows what he knows,” says Cardy. “He gets very good people to do what he doesn’t know, and he gives them free reins.” But he’s also impatient. “You have to get things done. You can’t wait around,” Cardy adds.

MacDonald’s belief in constant improvement shows itself on the sales side, with what he calls “Oh wow” factors to pitch to customers. His current “wow” factor is myMatrixx’s mobile app, which allows patients to access ID cards, look up the names of their prescriptions and see the status of their drug fulfillment, so they don’t have to wait at the pharmacy for the insurance to send an approval. The app notifies the client if prescriptions or services are not covered under typical guidelines and need approval from the insurance company. Field adjusters and nurse case managers can also leverage the app to communicate or order necessary supplies directly from their phones.

MacDonald embraces the fact that his company is “young and innovative, offering the solutions that older legacy companies are not offering,” he says. He asks companies to take a risk, rather than playing it safe by sticking with what they know.

He dresses the part, too. Typically clad in casual attire like jeans and a cotton shirt, his director of marketing had to beg him to wear a tuxedo to the 2012 Ernst & Young Entrepreneur of the Year Awards, for which he was nominated.

Out of his competition – PMSI, Healthesystems, TechHealth, Progressive Medical, Express Scripts, and CyberCare – four are in Tampa, one is his previous employer, and one is the company he founded. MacDonald’s next step to stay ahead is a service that uses business intelligence and data analytics to demonstrate predictive outcomes that will help insurance companies spot problems and intervene more quickly.

True to his passion for innovation, last year MacDonald launched a second company, MamaBear, a mobile app to help parents keep kids safe by monitoring social media. The app rolled out in 2012 as a free subscription and is currently at 30,000 downloads, with its fair share of national media attention.

MacDonald says it’s just another way for him to be creative and enjoy the process of invention.

“You just have to keep going, just don’t stop,” MacDonald says. “You never know, but one thing is certain: if you don’t keep trying, you’ll keep failing.”